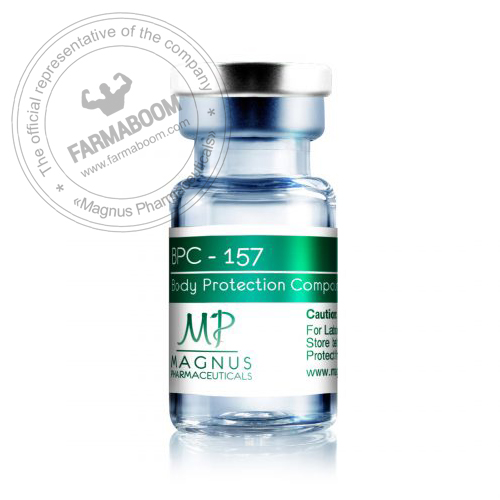 The peptide is a chain of 15 amino acid residues. This protein compound stimulates the regeneration of tissues, helps to eliminate and prevent inflammatory processes in all organ systems.

According to research papers BPC 157 has the following effect on the body:

The use of BPC 157 in the gastrointestinal tract pathology

As a result of studies confirming the ability of peptide BPC 157 to suppress inflammatory processes and prevent the occurrence of ulcers, it has been suggested that the peptide plays a significant role in the treatment of gastrointestinal diseases. It has been proven that it effectively eliminates inflammatory processes in the intestines, as well as in the surrounding tissues.

For example, its use is justified in the case of such pathologies as:

The ability of peptide BPC-157 to eliminate inflammatory processes is also used in dental practice. So, as a result of scientific experiments conducted on rats, it was found that the introduction of BPC-157 in the area of the gums affected by periodontitis, significantly reduces the appearance of inflammation and, further, accelerates the process of tissue repair. In addition, this protein compound contributes to the preservation of calcium in the tissues of the tooth.

According to scientific experiments, the introduction of peptide BPC-157 in the area of damage contributes to its rapid healing. Migration of fibroblast cells was observed at the site of tissue rupture, their growth and the production of specific, stimulating regeneration, proteins.

For tissue damage, peptide injections should be placed as close as possible to the site of injury.