Simon
Farmaboom is amazing and very trustworthy. I highly recommend the service and will be a repeat customer. The quality is A+. Thanks.
Italy
All reviews
Shop > Orals > HALOTESTIN 5mg – Magnus Pharmaceuticals 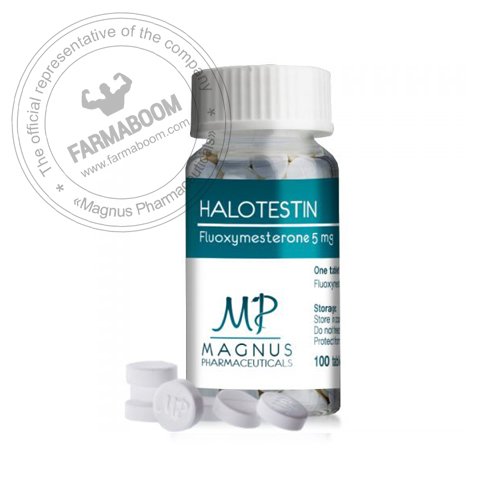 Having compared these values ​​with testosterone we see how fluoxymesterone has immense power in terms of its anabolic capacity to build muscle as well as its androgenic strength. For comparison, an anabolic and androgen power of testosterone is rated with the number 100.

Although for the same purposes testosterone represents a safer and simpler treatment, fluoxymesterone is today still available by prescription in the United States. Fluoxymesterone has added methyl group at carbon 17 (hence the name derived from 17-alpha) and halo-group on the 9th carbon. Adding a methyl group at carbon 17 is the change that provides the hormone the ability to survive metabolism in the liver, and thus allow a greater amount of hormone to successfully get into the bloodstream.

Unfortunately, this modification also increases the rate of hepatotoxicity (liver toxicity). Connecting halogen to any substance is called halogenation. In our case to the testosterone was attached with fluorine (halogenated). The halogenation is responsible for the massive increase in androgen and anabolic forces of fluoxymesterone compared with testosterone and methyltestosterone.

Compared with testosterone fluoxymesterone has one more change and that is the attached hydroxyl group (an oxygen bonded to a hydrogen atom) on the 11th carbon.Connection of the hydroxyl group at carbon-11 accounts for the fluoxymesterone inability to react with enzyme aromatase and therefore preventing it conversion to estrogen.

Remember that your doctor has prescribed this medication because he or she has judged that the benefit to you is greater than the risk of side effects. Many people using this medication do not have serious side effects when it is used at normal doses.

Tell your doctor right away if any of these unlikely but serious side effects occur: mental/mood changes (such as anxiety, depression, increased anger), trouble sleeping/snoring.

If you are male, tell your doctor right away if any of these unlikely but serious side effects occur: trouble urinating, breast swelling/tenderness, too…

It does not take a lot of Halotestin to see any benefit; a mere 10mg every day will greatly increase strength in any individual and a mere 20mg per day will greatly provide the hardness a competitive bodybuilder will be after. Even so, while 10mg will work normally most will administer 20mg to 40mg per day max with 40mg per day being the most common. Those who go above this amount will find there will not be much improvement beyond that dose; the only thing that will greatly change is liver enzymes will go up even more.

There is generally no applicable purpose for Halotestin outside of competition; a power lifter or bodybuilder will rarely use this steroid during his off-season as it would be unnecessary. The rule of thumb will always prove to be 2-4 weeks of use and the optimal time is prior to completion including competition day. Most will find their Halotestin works best when taken in two separate doses per day as the steroid has a short half-life of approximately 9.5 hours. 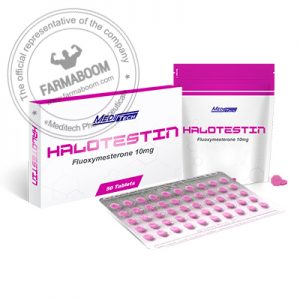 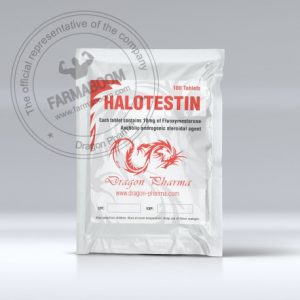